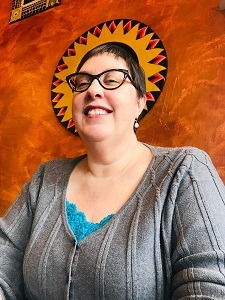 The New Mexico State Library welcomes Bentley Clark as the new Interlibrary Loan & Reference Librarian.  Bentley is a native New Mexican and can boast about being a Lobo, an Aggie, and a Suncat.  Raised in Las Cruces, Bentley earned a BA in English at UNM, a MS in Hotel, Restaurant & Tourism Management at NMSU, and a paralegal studies certificate at CNM.  While living in Portland, Oregon, Bentley reached the milestone of 10 years as a family law paralegal and decided it was time for a change.  After a serendipitous meeting with the amazing youth services librarian from Tigard Public Library, Bentley turned her sights to library science, earning her MLS from Emporia State University – thereby adding Corky the Hornet to her list of mascots.

In February 2021, Bentley returned to New Mexico to become the Library Cataloger and then the Interlibrary Loan & Reference Librarian for Roswell Public Library.  As the library was short-staffed due to the pandemic, Bentley had the opportunity to cross-train in various departments.  As a result, she realized that interlibrary loan and reference services were right where she belonged.  Bentley looks forward to working with libraries statewide to sate the diverse – and fascinating – reading appetites of New Mexico library patrons.  She also hopes to become an asset to researchers far and wide who rely on New Mexico State Library for their information needs.